So here begins my comprehensive wrap-up of all things Sydney, since I conveniently neglected to do so whilst I was there.

Friday’s main purpose was to watch Day Three of the Second Test between Australia and India at the SCG; which therefore meant that the early part of my day was concerned with getting myself safely to USyd, and then getting myself out to the SCG. So, I arrived at the Women’s College at the Uni only to find myself not booked in at all, and with the reception staff oblivious as to what to do. This was mildly annoying, so I left my bags at the college, and found my way out to Central to catch a bus to the ground.

Getting out from Women’s to Broadway consists of a trek through the oldest part of the main USyd campus, and this time also implied a trek through the Quadrangle. This is the quintessential “Old Sandstone” building on the USyd campus, and if you’re ever in the area is well worth a look at. Walking down from the campus and to Central was generally nice. Bus fares from Central to the SCG were cheap (hurrah), so all that left was a walk from ANZAC Parade and into the ground.

The SCG entry is set up like a maze; there is one central entrance for bag checks, and then a massive detour to get to the stands — all in all, I suspect that due to approaching from the angle that I did, I walked an extra 2KM to get to the ground than I would have at a ground with a sensible entry setup.

I met up at the gate with Ben Vance, a friend from my ISSC’05 days, and we proceeded to find our seats — they were good :). Highlights of the match included Brad Hogg becoming the irrational crowd favourite, missing Adam Gilchrist’s 400th Dismissal due to getting food, 50s from Ganguly and Harbhajan (“Hop-along”) Singh, and seeing Sachin Tendulkar achieve 150, which, admittedly is exactly what I wanted to see when I first decided I wanted to go to the match. It was also amusing to see Kevin “Oh-seven” Rudd get booed when his picture appeared on the Big Screen — clearly Sydney appreciates its life members.

At the close of the day’s play, I walked from the SCG back to the USyd campus (which wasn’t all that far, despite what it looks like on maps), in anticipation of meeting James Curran (the main organiser of NCSS), who needed me to meet a teacher (who was attending NCSS) at Central… I won’t continue that story, as it involves running a minute late, and missing the person I was due to pick up. Oh well. Such is life. I finished the day by settling into St Paul’s College, which ended up being where I stayed (not Women’s), and slept, ready for the chaos that would be Saturday.

Taxi from the Airport

Saturday was a standard, uninteresting morning, brightened by the fact that I had to begin it with my first experience of College Breakfast since my experience of it in KXT312 (those conveyor toasters are sooooo cool!). I followed that with a cup of “coffee” (read: emulsion of sugar, milk powder and Nescafe), and a walk around the campus, making a point of actually finding out what all of the buildings were, and making myself familiar with a campus that I would need to appear “at home” with — given that by the end of it I was already giving people directions, I suspect that I’d done a decent job. My second offical job with the summer school was to hang around International Arrivals of Sydney Airport in order to await another student — his flight schedule read “Osaka/BNE”… strange. Due to the nature of the arrival gates of International, as well as the fact that I had no idea whom to look out for, I was slightly nervious about missing a second passenger (after what had happened on the Friday night). Happily, only 40 minutes after the scheduled arrival time, he arrived, and we caught a taxi back to USyd (incidentally, he was from Queensland, and needed to travel with a passport, and proceed through customs on both ends of the flight — I’ve since decided that Queensland is worthy of being considered another country).

The rest of Saturday afternoon was a bit of a blur, due to the amazingly large amounts of work needed to be done to set up the opening night. Happily, we succeeded, and right on schedule, the summer school began. 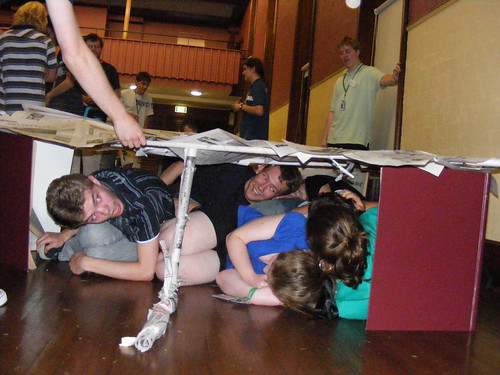 As past NCSSers would know, the “team-building” challenge each year is to build a structure out of newspaper — in past years, the criterion was to make it as tall as possible — this year, instead it was to build a free-standing shelter, judged by how many people would fit under it. The returning group (who I tutored) certainly won on a Per Capita basis, but not overall. Saturday concluded with writing the first (and only) copy of the Daily Hack.

There, that’s it for this installment of my NCSS story — more to come later.