Time for me to enumerate a few things that have happened of late (in reverse order of occurrence, naturally), since it now seems like the time to do so.

I handed in my Computer Science term project today, which, I suppose means that my academic year is now complete. I’m fairly happy with how the semester’s progressed, every unit that I studied (including the two that I chose on a whim) has been excellent, which is more than I can say for previous semesters. Analysis (Real analysis to be specific) was absolutely fantastic, and I’ll be doing my best to enrol in the follow-up functional analysis unit (I’ve had it suggested to me by several people, and I’m convinced), and it’s certainly made the maths major I’m now enrolled in seem like a very good idea.

As far as I can tell, exams went well, but I won’t know for certain until results are released next week (I’m very confident with my two maths units, Graphics is a different story (though I don’t recall doing as badly as the lecturer claims the class as a whole went)).

In other (though slightly Uni-related) news, TUCS (The UTAS Computing Society) had its Annual General Meeting for 2009 last week, and as well as discovering the joy of barbecued* Woolworths’ Quantity Burgers (they’re excellent, really!), I was elected society president for 2009. The rest of the exec are also a truly awesome bunch of people, so the future certainly looks bright. 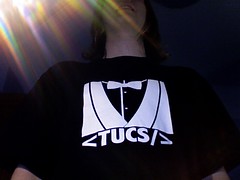 TUCS has run some excellent events in its inaugural year: our tech talks were, in general, wildly successful, amongst other things. Thanks to that, we’ve become what appears to be one of the most active societies on campus. I’ll be doing my best to make sure that we can replicate, or even better that next year. (If you’re a speaker, or know any good ones, and would like to give a talk, let me know!)

In related news, we also took delivery of some particularly awesome TUCS-Branded T-Shirts just after exams — we’re particularly happy with how that went and will probably do it again next year.

Last week-ish, I had dinner with some members of the Linux.conf.au organising committee. Though much of what was discussed must be kept under wraps (it’s thoroughly exciting, I promise!), I can tell you that the conference is shaping up to be most excellent, and if you haven’t already booked your ticket, I suggest you do so as soon as possible!

That is all for me for now, more news as it comes (I hope!)