So I’m sitting on a plane travelling out to Melbourne on Saturday (just in case I don’t get to post this until later), yesterday was the Google Party, and instead of relaxing at the Open Day, I’m getting shipped off for ACM practice (meh). So I guess I should make some attempt to wrap up the week given that I’ve made no attempt to blog this week amidst the rabid photo-taking that occurred this week…

Following is a 5-part set of posts about what I did at LCA, and the talks that I remembered going to — it’s mostly a late braindump, hopefully I remember everything of importance. Also, I don’t link to any of the talks’ video because it’s not up yet… I’ll blog with my best-of videos link once it’s available.

I spent Monday mostly in the Linux Kernel Miniconf, highlights included the opening talk (Parallel Programming: Is it hard, and if so, why? by Paul McKenney), which outlined some parallel programming models and a discussion of how parallel programming environments can be improved in the future. His talk was eclipsed by an analogy involving toilet paper — I’m not entirely sure what he was trying to get at, but he did challenge the audience to re-rolling the unravelled roll, so Rusty took up the challenge… 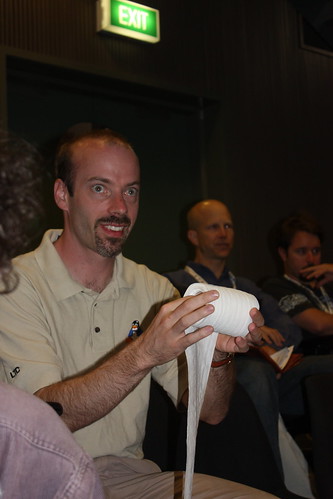 At lunch, I took some of the Sydneysiders to various computer stores in order to track down a wireless access point that would run OpenWRT. This proved to be a mistake, as they spent upwards of 30 minutes arguing over which model to buy. Never again! Luckily I managed to actually track down some lunch at La Bella Pizza in town.

Matthew Garrett’s talk “How I learned to stop worrying and love ACPI” (the Dr Strangelove reference clearly lost on some people) outlined some of the problems he’s encountered whilst getting ACPI support into the kernel. One of the main issues is the requisite Turing-complete language that ACPI must implement. I’ll let Xzibit explain: 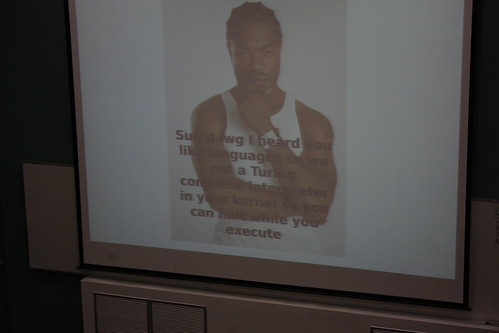 Instead of seeing Rusty’s talk on Large CPUmasks, I went to Bdale’s talk on collaboration with large corporations, which was, as is usual with Bdale, quite insightful and enlightening. The conclusion of the day was the “Ask a Kernel Hacker” Panel at the Kernel Miniconf, which was interesting.

So, about that Wireless for the apartment? I took some intrepid guests to our local Officeworks store, where they picked up a Linksys WRT54G2 rapidly. I’m really glad that that one sorted itself out quickly, as it let me get onto the conference network rapidly, and actually upload my photos for the day.