Tom Limoncelli opened the conference proper with his keynote on “The Scarcity Mindset vs. The Abundance Mindset”, which was an interesting and insightful talk on how the modern abundance of computer hardware, coupled with open source software can help sysadmins make better use of their resources. I must congratulate the organisers of the conference for selecting a sysadmin talk as the opening keynote: LCA has suffered from a lack of sysadmin talks (which the miniconf has fixed to a certain extent), and having such a keynote open the conference is an excellent investment in furthering sysadmin content at future LCAs. That said, the talk was very sysadmin-specific, and was therefore not directed well at the majority of delegates (discussing things like implementing better tech support policies in the workplace). For those more willing to look at the bigger picture (i.e. by factoring out the direct application to sysadmining, the abundance mindset is certainly something that can be used to better support open source development.

This, for me, was followed by Keith Packard and Carl Worth doing a double-feature talk on recent developments in X, followed by a demonstration of the Linux graphics pipeline, including some discussion of how graphics drivers can be improved to allow better rendering from (say) Cairo and OpenGL. I went to the Django tutorial after lunch, which was reasonably interesting, though I stopped actively participating about halfway through. It was interesting to see how Django works, and how some of its choices were made as far as design was concerned — in particular how there are many features designed for journalists, since Django was developed in-house by Journalists in Kansas.

Post-afternoon-tea, I went to Jonathan Corbet’s talk on joining the Kernel development process, which was a departure from his usual “Kernel Report” talk — he explained the significance of the various trees of kernel development, and explained how to work with subsystem maintainers in order to ensure that your driver became well-maintained into the future. This talk was significantly enhanced by Linus Torvalds being in the room, helping answer questions and providing further input into the presentation as it presented: this was probably the closest he got to presenting for the entire week. Following this was Martin Krafft’s talk on the vcs-pkg.org project, or how distribution package maintainers can collaborate with their counterparts at other distros using distributed VCSes such as Git. He presented a good discussion of his own workflows, as well as discussion of the suitability of various tools for the purpose of cross-distro collaboration. 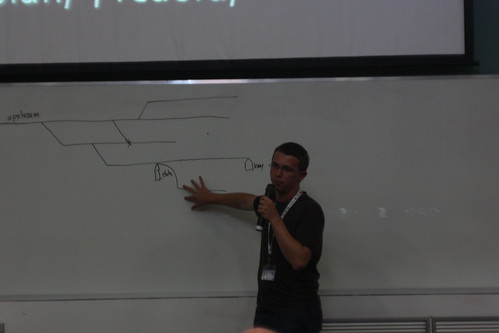 The real highlight was Wednesday night’s penguin dinner, which featured the most bizarre auction that I’ve ever seen, which ended up with a consortium of Kernel Hackers and Collabora paying AUD$10,500 for a print of a photo, and a beard. This has already been discussed adequately elsewhere, so I shalln’t bother.