Friday’s keynote was fantastic — Simon Phipps (who retained his job at Sun Microsystems) spoke of the Third Wave of Free Software, which was an observation that Free Software (specifically not Open Source) is becoming a sensible business proposition. It’s about time that it did. It was refreshing to see a large corporate’s view of the world of Free Software largely agreeing with my own. Talks after morning tea were Tridge’s talk on his automatic cluster testing framework (pretty cool), followed by Conrad Parker’s talk on Ogg Chopping, which despite the name, was actually a 50-minute rant about why Haskell is cool — I’m sold (I think), but somewhat confused about the talk — really, I have no idea what happened. I strongly urge you to watch the video (when it becomes available) in order to figure out what happened for yourself.

Lunchtime was the Great Unbeardening — Linus Torvalds (who was roped into the act at the auction on Wednesday) shaved Bdale Garbee’s beard — the result? Disturbing. Really disturbing, but all in the name of charity. The #lca tag on twitter was displayed on the projector screen, so live audience responses were shown as the shaving continued, including one Maclabbian pointing out the relative weirdness of the event; photos were up on Flickr well before the end of the event, and Southern Cross News came to film the event (focusing on the shavee, and not the mysterious Finn doing the shaving…). 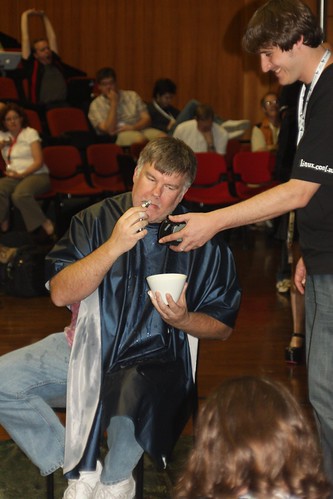 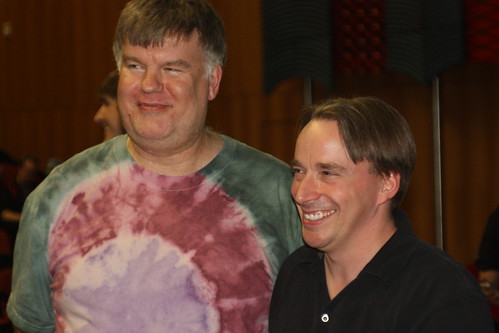 Matthew Garrett’s talk on Power Management that works was great: nothing too technical, but an excellent discussion of the user interface issues surrounding power management. Matthew’s talk was unique in that his talk covered everything in his abstract — this includes answering the question “will we ever get to beer island?” — the answer? Yes, provided you’re in Texas. Following was Geek My Ride, presented by Jonathan Oxer and Flame — this was a pretty cool demo talk, showing how the two of them have modded their cars to include some pretty cool stuff, including in-dash diagnostics, MP3 playback, and remote ignition (wow cool!).

The final talk of the conference was Bdale talking about rockets, which as usual were pretty cool. Lightning talks concluded the conference as they did in 2008 — nice to see them becoming an LCA tradition, I will definitely aim to present at least one next year.

So that’s it. LCA is over for another year, and will reconvene in Wellington, New Zealand for 2010 — I’ve never been to New Zealand, and am really looking forward to going there next year. The 2009 Conference was excellent, the talks were well-presented, and the organisation of the conference was such that it appeared from the outside that the everything ran well (I’ve been told that that was certainly not the case). The conference allowed us to show off Hobart to the technical world, which is an opportunity that does not present itself regularly — I’m glad that we got that opportunity, and I think most delegates this year will agree that it was an opportunity that was well-received, and resulted in an excellent conference for all involved.

Also thanks to Adam Harvey and Monica Wood for helping out at UpDNS — you certainly made my job in organising it a lot easier; Linux Australia for having faith in the organisers ability to put on the conference — I hope your investment in the Tasmanian Free Software Community pays off.