Wow. It’s been a thoroughly busy month, lots of things to recap, so I won’t bother going into too much detail… Here’s a selection:

In February, the Apple University Consortium sent me to Sydney for their annual Cocoa Developement workshop, and to Melbourne for their inaugural Ruby on OS X Workshop. Both workshops were great, and if you attend an AUC Member University, you really should sign up for their future workshops; that said, I can’t see me seriously using Rails for anything in the future, and Obj-C peeves me… Cocoa, on the other hand is seriously exciting, and even from a few days’ exposure, I can see why Cocoa developers love their framework so much, and the lack of a similar facility for making good UIs quickly in Linux is really obvious to me now . Hopefully this is something that gets addressed in future releases of the major desktop environments.

Uni went back this week, and it’s been all-in-all rather eventful. It’s the start of my final semester of undergrad study, which is going to encompass holding the presidency of TUCS, our Campus Computing Society, going to Stockholm to compete in the ACM Programming Contest, all the while juggling effectively 5 units of study. How I’m going to cope with it I have no idea, presumably I will though…

This semester, I’m studying three maths units (two pure, one applied): Computational Methods (or, how to avoid doing hard maths… clever how they keep that one for third year), Algebra 3 (mostly group theory this year) and (Functional) Analysis 3; Computing-wise, I’m studying Data Mining & Text Retrieval (the 3rd-year Machine Learning unit), and Advanced Web Development (purely as a Gimme unit). Hopefully this one constitutes a reasonably good mix between fun and interestingness — and hopefully not too time-consuming. On another note, Kumudini (the lecturer for Analysis) deserves special thanks, as she’s gone out of her way to ensure that Analysis is being offered before Semester 2 for me, which I’m quite grateful for (as it means that I can graduate with the Pure Maths Major).

Mentioning the start of semester without mentioning Societies day would be quite amiss — for those who are unfamiliar, socieities day is a 3-hour event held on the first Wednesday of the Uni year, where students signup for their chosen sports clubs and societies, generally in return for Alcohol. This year, however, the Union made the curious decision to spilt the allocated space in two, and provide a dry area, which proved to be very useful for us at TUCS (as we’d decided quite some time eadlier that we’d not be providing alcohol). The Union kindly provided us with space directly outside the wet area, which gave us a massive wall for advertising, and the dry area made all our volunteers highly visible (due to there actually being space to move about).

TUCS put on a Barbecue, and provided “Enticing Gift Bags” (full of things including leftover LCA09 schwag) to new members. The Nett effect of this was that TUCS signed up 115 members, which is almost three times as many as we managed on societies day last year. Obviously, we’re pretty happy. 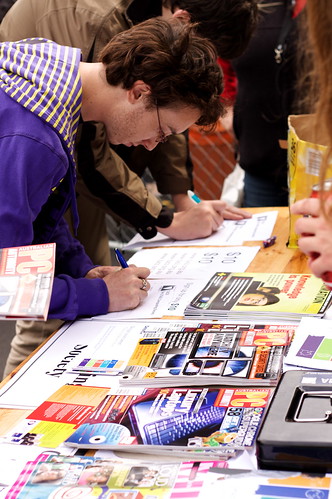 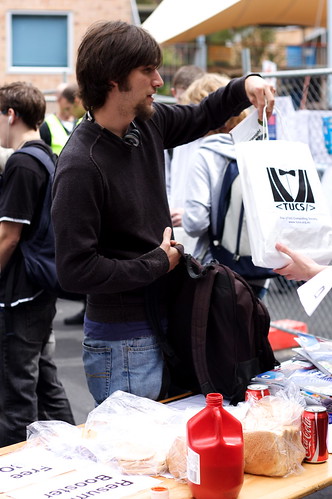 That’s all for now, more as it comes!