On Monday, I had the wonderful opportunity to walk through my third graduation ceremony for what is effectively the same degree! So a bit on how that happened, maybe? 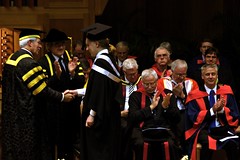 Well, I completed my Bachelor of Science with Honours degree in June, from which I graduated with First Class Honours in August. Just on two weeks ago, I received a further letter, suggesting that I attend another graduation to collect a University Medal. The University Medal is the highest award that can be awarded to an Undergraduate Student at the University of Tasmania, and my friend Josh Deprez did an exceedingly thorough writeup of the dimensions etc of the Medal itself when he won his last year.

Hmmm. Not so convinced I want to aim for a uni medal now. Really really worrying about the number of opportunities the dean would get to mispronounce my name.

Luckily for me, they paid attention to this and solved the problem by awarding two other Medals in the same ceremony (one to a Maths/Physics student, Paul Stack; the other to my colleague from Computer Science, Theo Wadsley, both of whom thoroughly deserved their awards). This resulted in the script detailed in Josh’s post being altered to something resembling: 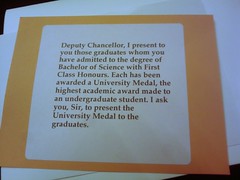 Naturally, my name still needed to be read out, so I made the requisite alteration to my card in the hope of something resembling the correct pronunciation appearing (this is primarily due to the Dean at my BSc graduation in 2009 pronouncing my surname as ‘Nee-ge-boa’): 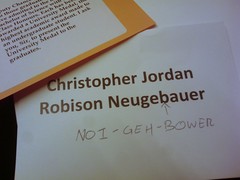 The result wasn’t that bad (Something along the lines of ‘Neu-bauer’, which I’ll accept as a pass :D).

Since Josh’s graduation last year, they’ve made slight variations to the process of handing out Testamurs, instead of having blank scrolls handed out, the testamurs are now handed out in envelopes at the ceremony. In this case, like every other student, I was handed an envelope reading “Your Graduation Certificate”, bearing a large UTAS Lion on it. Unlike every other student, mine did not contain a testamur (I collected mine at my proper graduation in August), but instead a blank piece of cardboard — this naturally led to jokes about the worth of my degree…

Finally, here’s a photo of me with the medal, and its obverse, just in case you were at all interested: