After three years in the job, I’ve finally relinquished the role of President of the University of Tasmania Computing Society (better known as TUCS). The years I spent as President spanned the last year and a half of my time at uni, and the first year and a half outside of that life — it’s something that’s been a pretty constant thread over the past few years, and it’d be a shame if I didn’t take a moment to dwell on my time in the role.

My first year representing TUCS was 2008: I’d come back to uni having attended my first Linux.conf.au in Melbourne, fresh with the knowledge that it would be held in Hobart the following January. The previous computing society at UTAS, the Internet Developers Society had elected to change its name at the previous year’s AGM, and with that new start, I decided to run for the exec of the society. I didn’t really have any aims at the time I ran, save for making the Uni computing community closer to the Open Source movement that I knew and loved at the time. 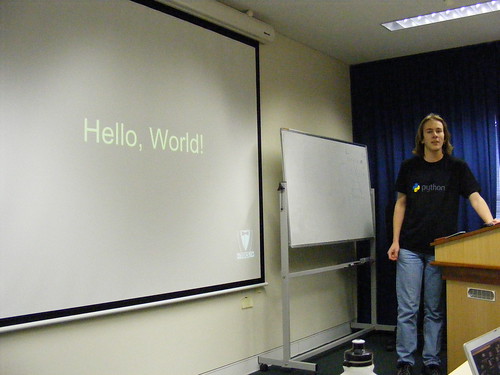 It was with that that I decided to organise the first of the TUCS Tech Talks. It was a talk by myself on introductory Python. I think I spent the best part of two weeks writing, tweaking and rehearsing that talk, and learning how to get screen recordings going. To my astonishment, the talk was amazingly well-recieved: the room was packed, lots of questions were asked. But much more than the success of my own talk, what astonished me was that people at the barbecue after the talk were telling me about how they wanted to present their own. And a few weeks later, so it was. And the following semester, we had talks every other week, on topics ranging from StarCraft strategy to iPhone development — the advent of tech talks at TUCS exposed a strong enthusiasm for sharing knowledge with others, and it brought our society into great stead with students, staff and the broader tech community in Hobart. 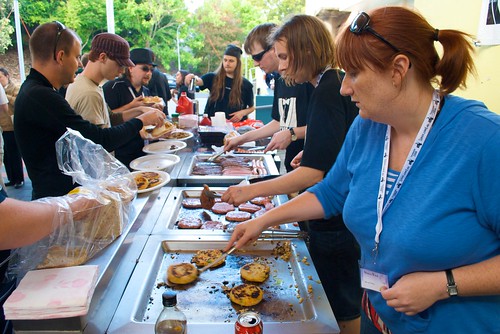 It was at the end of that year that I nominated as President, and happily, I was elected so. And when January rolled about, Linux.conf.au came to our home campus. Whilst TUCS wasn’t really involved with the event as much as I’d have liked, I did spot an opportunity for TUCS to contribute a small part — we ran a barbecue for student and hobbyist delegates to LCA as a way to help our members to engage with the rest of Australia’s tech community. This ended up being the first Unprofessional Delegates’ Networking Session, and it’s an event that I have continued to run at LCA ever since — for the 2012 conference in Ballarat, we brought the UnPDNS format back to the format that we ran for the first time in 2009, and the mood was as good this year as it was in 2009. It’s an event that I’m proud of starting, and the event happened because TUCS members contributed so much to getting that first UnPDNS organised in 2009. 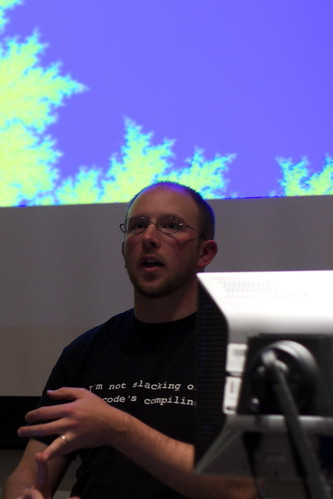 Our Tech Talk schedule improved substantially that year, too. We had the first of our talks from then-Ph.D student, Jonathan Adamczewski on development for PS3 devices. He’s presented almost every semester since then, and his topics have been both diverse and exceedingly in-depth on whatever topic he chose to cover — my personal favourite was a talk showing how “Hello World” programs actually work on Linux systems. We also had the first of our talks by Paul Fenwick — that year, he packed out the tiny seminar room we were using for tech talks with his fascinating insight into the info you could glean from the Facebook API. 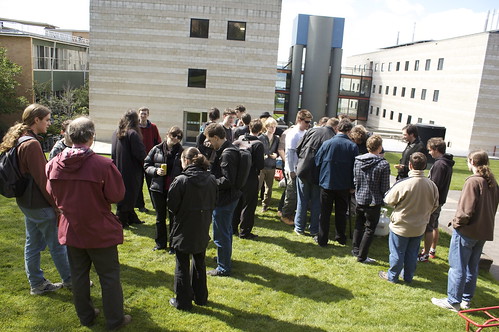 The other great discovery that arose from the talks series at TUCS was our frequent series of Lightning Talks — once per semester, students came to share three minutes of whatever insanity they decided they wanted to talk about. We’ve had talks on everything from Alex Berry’s experiments with the postal service; to self-devised esoteric programming languages; to buyers guides for headphones. These talks turned out to be a lot more fun than I could ever have hoped for, and they’ve been a great show of the minds that the society has attracted over the years. 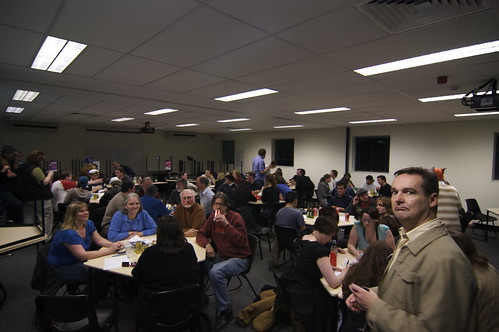 And so it was that last year, I found myself away from Hobart on a very frequent basis, and I came to the conclusion that I couldn’t contribute to TUCS on the level that I had in previous years. Though I tried to give up the post last year, with nobody to replace me, I found myself in situ for a third year. The time I did have to contribute to the role of President last year was spent finding and preparing suitable replacements to come on board the next year. Thankfully, new members with huge amounts of drive started to appear — we ran end-of-semester events for the first time since 2009. We ran an end-of-year Quiz Night, which was a huge success for the society, and showed that the society had strength and enthusiasm to continue on for years to come. 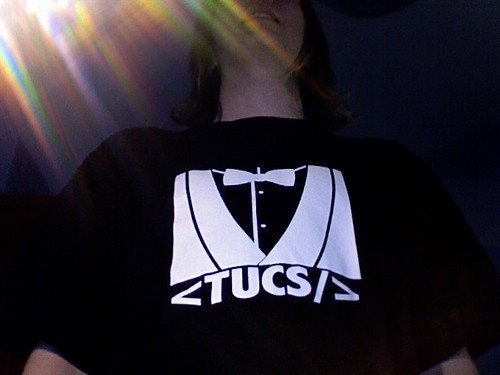 Of course, my own contribution as President over those years did not a society make. The execs who I served with over the years made the society great. The treasurers, Michael Ford, Luke Hovington and Matt D’Orazio all helped make sure that the society was profitable every year I was involved, and keeping on top of grants from the Union. Matt, along with Tim Nugent made sure that the LAN parties that IDS had run for years before continued on well into the TUCS era. Luke Hovington, our tireless sysadmin, kept our old box alive on duck tape and twine, and is overseeing the transition to a new server box with Matt. And Eloise Ducky, who went from being the squeaky year 11 student who showed up on societies day in 2009 to being the person whipping me and the rest of the society into shape as 2011 came to a close. 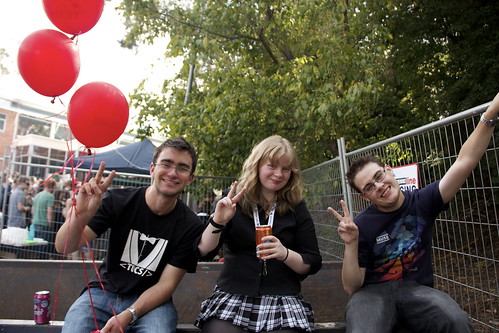 And so, my term in charge of the society has come to an end — I feel that my hope of creating a community in which students could share their love of computing with others was met; along with keeping the society as bridge between students and university staff, and the IT industry more broadly. They’re goals that a Computing Society at a university should hold at the forefront of what they do, and I think it’s the reason why TUCS is held in high regard.

I hope the years that I spent in the society have changed it for the better — it’s been a lot of hard work, but it’s work I’ve enjoyed, and it’s a role that I’ve greatly relished filling. And thanks to all of the TUCS members who elected me to the role in the first place, but saw enough in me to re-elect me to the role for the following two years. I hope you think it’s been worth it.

Whilst I wasn’t the first President of the society, I was the last. The AGM last year removed the roles of President and Vice-President in favour of holding two Co-Presidents’ offices. I’m sure Eloise, along with Ben Lea will fill these roles with great enthusiasm and with the goal of making the society the best it can be for its members (take care of my baby for me, OK?). Whilst I’m staying on in the executive as a general representative for the rest of this year, it’s going to be interesting to not be in charge of the place.